The largest U.S. auto-dealer chain has lightened up on lighting up.

AutoNation Inc. no longer refuses to hire job applicants who test positive for marijuana in drug screenings, Chief Executive Officer Mike Jackson said in an interview. The shift, which Jackson said was made quietly two years ago, shows that corporate America’s hiring practices are evolving along with pot’s legal status.

“If you tested positive for marijuana, you couldn’t join our company,” said Jackson, 68. “At a certain point, we said, ‘You know what? That’s wrong.’”

AutoNation may represent the first wave of a coming trend as marijuana becomes more socially acceptable and companies vie for workers in the tightest labor market in 17 years. A Gallup poll in October found that 64 percent of Americans are in favor of legalization, the most since the firm started asking the question in 1969, when only 12 percent supported it.

“Companies recognize that they don’t screen for alcohol,” said John Challenger, co-founder of Challenger, Gray & Christmas, a Chicago-based employment firm. “So why would they do it for pot? As the war for talent grows and gets fiercer, it makes no sense to rule out a whole segment of candidates on something that just is no longer relevant.” 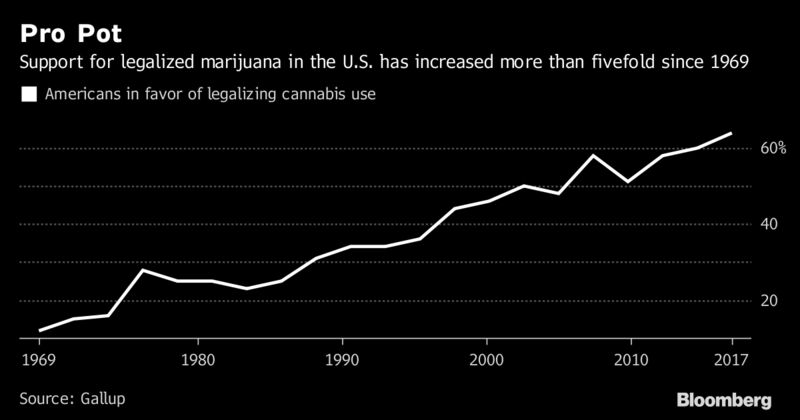 The legal marijuana business in the U.S. is projected to grow to $50 billion by 2026, from $6 billion in 2016, according to investment bank Cowen & Co. Eight states and the District of Columbia have legalized cannabis for all adults, while 29 states allow it for medical use.

As more states legalize — Vermont will do so in July — more employees are testing positive on drug tests, according to a Quest Diagnostics report released last year. Positive tests for marijuana rose about 75 percent from 2013 to 2016, the study showed. Results were based on more than 10 million drug tests.

Pot remains illegal under federal law, and U.S. Attorney General Jeff Sessions, a longtime opponent of legalization, this month rescinded the Obama-era policies that enabled state-legal cannabis industries to flourish. Fears of a looming federal crackdown have unnerved the industry.

With all the uncertainty surrounding pot’s legal status, many companies will probably choose to maintain the status quo. Restaurant Brands International Inc., which owns Burger King, hasn’t made changes to its corporate marijuana policy, said CEO Daniel Schwartz. And Ford Motor Co. still treats the plant as an illegal drug, according to a company spokeswoman.

But eventually there will be a tipping point where companies must adapt to new social norms, Challenger said. Until then, it makes sense for executives to be cautious, especially in the current, highly polarized political climate.

“There is a PR issue here,” he said. “Companies know that there are people who think like Jeff Sessions thinks. Companies need to be very careful about being political, because they want to sell their products to the far left, the far right, the middle, everybody. They don’t want people saying, ‘No, you did something I don’t agree with’ — on either side.”