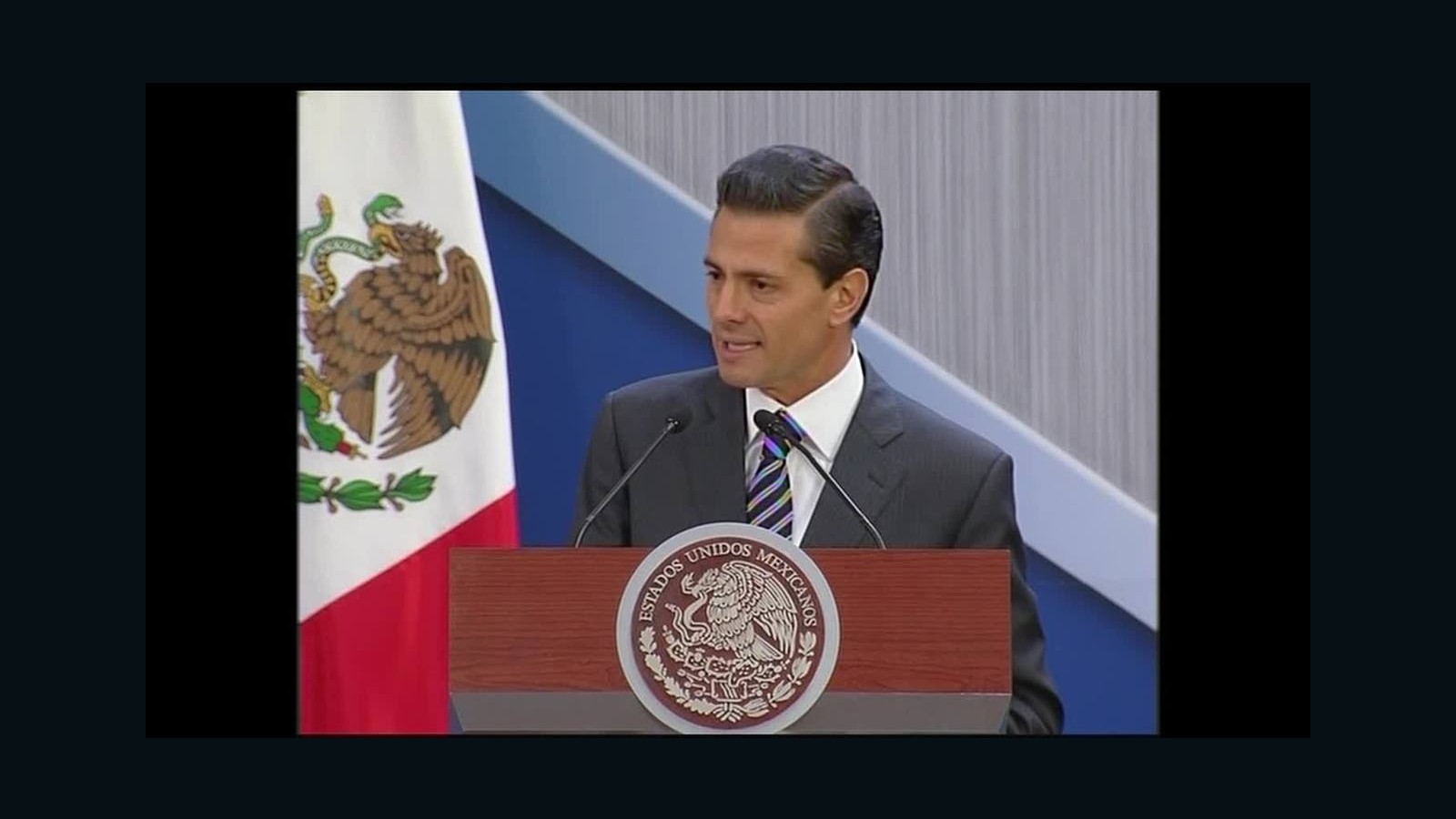 (CNN)Here’s a look at the life of former Mexican President Enrique Pea Nieto.

Birth place: Atlacomulco, Mexico
Birth name: Enrique Peña Nieto
Father: Gilberto Enrique Peña del Mazo, an engineer
Mother: Maria del Perpetuo Socorro Ofelia Nieto Sanchez, a teacher
Marriages: Angélica Rivera, (2010-present); Monica Pretelini Saenz, (1994-2007, her death)
Children: with Monica Pretelini Saenz: Paulina, Nicole, Alejandro; while still married to Saenz: one son with Maritza Diaz Hernández; one son, died as infant, with woman unknown to Fast Facts researchers.
Education: Universidad Panamericana, B.A., 1989; Instituto Tecnológico de Estudios Superiores de Monterrey, M.A., 1991
Religion: RomanCatholic
Other Facts:
Peña Nieto’s election marked the return to power of the Institutional Revolutionary Party (PRI). The PRI controlled the Mexican presidency for more than 70 years, until the 2000 election.
Rivera, his second wife, is an actress who starred in soap operas.
He was the fifth member of his extended family to serve as the governor of the State of Mexico. His second cousin directly preceded him as governor.
Timeline:
1978 – Attends school in the United States for a year to learn English.
1984 – Becomes a member of the PRI.
1999 – Begins working for his cousin, Arturo Montiel Rojas, governor of the State of Mexico.
2000-2002 – Secretary of administration for the State of Mexico.
2003-2004 –Representative of the 13th District of the State of Mexico.
2005-2011 – Governor of the State of Mexico.
January 2012 – Reveals that he fathered two children out of wedlock with two different women, while married to his first wife.
July 1, 2012 – Wins the presidential election, with about 38% of the vote.
August 31, 2012 – The electoral tribunal validates election results and officially names Peña Nieto as president-elect.
November 27, 2012 – Travels to Washington and meets with US President Barack Obama.
December 1, 2012– Is sworn in as president of Mexico.
November 2014 – Protests erupt nationwide in reaction to the disappearance of 43 students from a teacher’s college in Guerrero state in September. The students’ parents have been highly critical of Peña Nieto for his administration’s handling of the investigation.
November 9, 2014 – The Aristegui Noticias website publishes an investigative report that alleges Peña Nieto and his wife have been living in a $7 million mansion owned by a contractor who’s won lucrative government projects. In a video, the First Lady says she has “nothing to hide,” stating that she paid for the house with money she earned as an actress.
November 27, 2014 – In response to the disappearance of 43 students, Peña Nieto proposes a series of reforms in order to help combat crime and corruption in Mexico.
June 26, 2015 – Has his gallbladder removed.
March 7, 2016 – Excelsior newspaper publishes an interview with Peña Nieto, in which he says Mexico will not pay for US presidential candidate Donald Trump’s proposed border wall.
August 21, 2016 – In an article published by Aristegui Noticias, scholars analyze Peña Nieto’s college thesis and conclude that passages were plagiarized. Peña Nieto’s office responds that he inadvertently left off attribution in spots.
August 31, 2016 – Following a meeting with Trump, Peña Nieto tweets he told the presidential candidate that Mexico will not pay for the wall. Trump tells reporters they did not discuss payment for the wall.
January 26, 2017 – Cancels a meeting with Trump amid renewed tensions over the border wall. The men later speak on the phone. The Washington Post publishes a leaked transcript of the call, in which Trump urges Peña Nieto to stop criticizing the wall proposal. Trump also reportedly refers to New Hampshire as a “drug-infested den” and claims, without evidence, that he won 84% of the Cuban-American vote.
June 19, 2017 – Signs a decree that legalizes marijuana and cannabis derivatives for medicinal use nationwide.
February 25, 2018 – Calls off an official trip to Washington to meet with Trump after a phone call in which Trump “would not agree to publicly affirm Mexico’s position that it would not fund construction of a border wall,” according to the Washington Post.
April 5, 2018 – Posts a video of a speech on Twitter in response to Trump’s rhetoric. Peña Nieto declares, “nothing and no one stands above the dignity of Mexico.”
November 30, 2018 – President Donald Trump, Canadian Prime Minister Justin Trudeau, and Peña Nieto sign a replacement NAFTA deal during a ceremony at the G20 summit. The USMCA differs from the 1993 NAFTA in several ways, including notable changes to car and truck manufacturing.
December 1, 2018 – Peña Nieto leaves office and is succeeded by Andrés Manuel López Obrador, known as AMLO.
January 15, 2019 – Drug kingpin Joaquin “El Chapo” Guzman once paid a $100 million bribe to Peña Nieto, according to testimony given by a former close personal aide to Guzman during his trial. Peña Nieto’s former chief of staff denies the allegation.